Apparently, cavorting with numerous alleged mistresses and posting it on his social media doesn’t build a healthy marriage. Here is Mas Sajady making intimate contact with his employee, Fei Xuan Zhou, and posting it on his business social media. Fei Zhou is pressing her breasts into him, while his teenage daughter is right in the room. What is he teaching his daughter — to be a subservient woman of a harem? 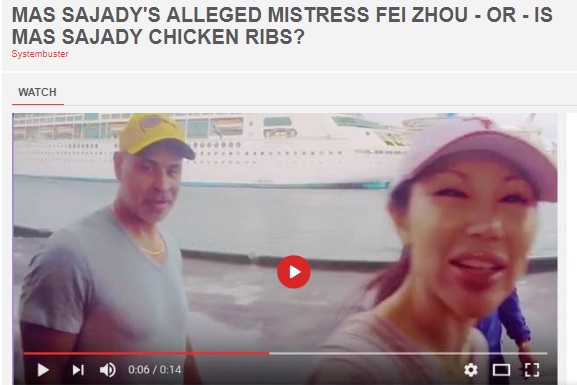 It was becoming a very messy divorce, with Tracy sending subpoenas to various banks and making discovery requests of secretive Sajady, whose business he called “Transparent Self-Image.” It is believed that Sajady nearly ended up in jail. To head that off he bullied his wife into bringing the divorce to a hasty end by June 2017.

As part of the divorce, it appears that Sajady shares custody of the kids, so he doesn’t have to pay alimony. It also appears that Sajady retained control of the homestead. The homestead is the house that Sajady bought in 2011 with $400K in cash, despite claiming to be bankrupt two years before. Like Sajady had torn apart the previous house they walked away from, he has done the same thing to this house.

For her part, Tracy Sajady was tired of living in third-world zones created by her husband’s perpetually unfinished houses. She bought her dream home for $625,000 in in nearby Victoria:  A new construction 5-bedroom, 4.5 bath, 4111 sq. ft. house squished into a .32 acre lot.

And Tracy Sajady appears to be in arrears. In June 2019 she took out a second loan for $75,000. Doesn’t the self-proclaimed family expert Sajady care about the financial welfare of the mother of his children?

Sajady appears to be in arrears as well. The Carver County property tax records page shows he hasn’t paid his fall 2019 taxes of $3815. The page also shows the property tax statements for the homestead being sent to his wife’s new address in Victoria, instead of the homestead property. It is likely that as part of the divorce, Tracy Sajady has a marital lien on the homestead.

Here is Mas Sajady testifying he’s had a bad marriage for 15 years.. The below transcript is from his 2017 lawsuit to abolish a whistleblower’s rights.

Below is commentary about Sajady’s claims.

Here Mas Sajady is complaining in court because his divorce, a matter of public record, was made public. He was trying to make a pity play to take away my Constitutional rights. He was acting like a victim, when the fact is he is the one who was making intimate contact with other women and posting it on his social media.

Here are a few of the platforms those of us exposing Mas Sajadyhave been banned or censored on at some point: