Many have questioned whether Teal Swan is working for the Illuminati aka New World Order (NWO).  She has used imagery which appears to be Illuminati signaling. And along with other gurus, such as Mas Sajady, Teal Swan has been a proponent for diabolical NWO values:  She justifies pedophilia, does suicide programming, and has expressed anti-Semitic sentiment.

This is a brief discussion of Teal Swan’s imagery, the nature of Teal Swan’s soul, and how it is that these demonic gurus are manufactured by the dark side in the first place.  The video below contains a full discussion.

Teal Swan has used some limited Illuminati imagery. As an aside, part of the NWO’s agenda is to turn all women into prostitutes. Teal Swan does a good job of looking like a prostitute on a regular basis.

The apparent Illuminati imagery used by Teal Swan includes the checkerboard (Freemason imagery), the single eye, the 666 sign, the “devils horns” hand sign. Her husband at the time, Sarbdeep Swan, also made a Roc hand sign, which has been used by Hitler, Merkel, and many public figures believed to be working for the NWO. 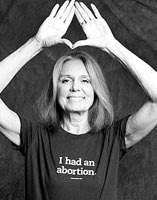 Gloria Steinem has made the triangle Roc sign. Steinem admits she was a CIA agent. Steinem claims to be a proponent for women’s rights – yet she worked for the CIA, which has been involved in the sexual slavery and torture of women and children

Cathy O’Brien and Brice Taylor are two whistleblowers who endured years of torture and sex slavery under the CIA’s secret programs.  They both say their young toddlers were raped by George Bush Sr.

The CIA hired over a thousand Nazis after WWII. Yet “women’s advocate” Gloria Steinem worked for the CIA, and has broadcast her alliance with the NWO by making an Illuminati hand sign. 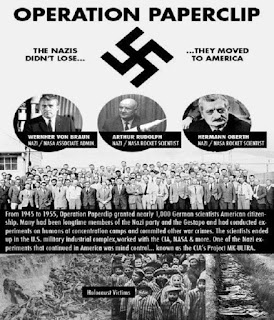 In a short video clip, Sarbdeep and Teal Swan flashed what appear to be Illuminati handsigns.  Teal appears to flash a modified version of the “devils horns” hand sign; Sardeeb holds his hands in a Roc handsign, which was also made by Hitler. In the clip, Teal Swan also looks at Sardeep’s hand sign shortly before she makes her hand signs. Her glance at his hands suggests that she is aware of what he is doing, and that they had talked about it. 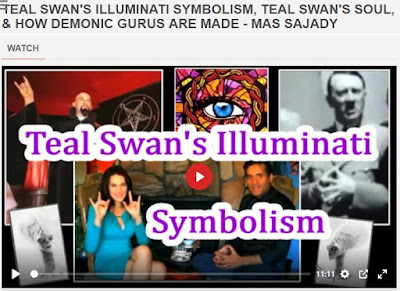 Did Sarbdeep Swan instruct Teal to make the handsigns she did? Was Sardeep Swan an MK Ultra handler for Teal Swan? Or is he just naively copying what Madonna presumably taught him?  Perhaps Sarbdeep can provide some more information.

Ralph Smart, who has made videos with Teal Swan, has also made some Illuminati gestures.

Sarbdeep posted a website about Teal Swan. His exposing Teal Swan has made him a little darling to many. His posts are well written, and pose a thoughtful analysis of Teal Swan’s fraud.  Typically Illuminati handlers would not spill the beans on their chattel.

Sardeep has since taken it down, likely under pressure from anti-free speech Teal, who has harassed other whistleblowers. — but you can find it archived here: 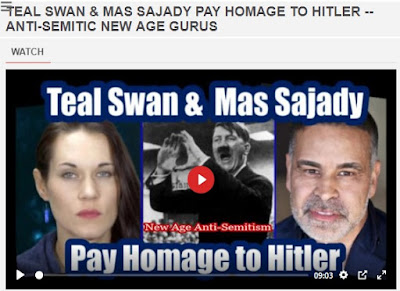 Demonic gurus such as Teal Swan and Mas Sajady often claim to be “gifted.”  But what’s typically going on is basically just a form of demonic possession. The dark side invades them as children, then these so-called “gifts” are the dark side operating through them.

The Dark Side Can Trick You with the Truth

The dark side can pose as spiritual leaders, appearing to disseminate truth. Psychics can obtain some truth through the dark side.  But any “truth” disseminated by the dark side is typically copied, then disseminated to bait people into its trap:  Gain people’s trust, then take advantage of them.  This video shows a clip where Mas Sajady describes how the dark agenda uses the truth to bait people, which is exactly what he does:  He offers a bit of the truth, gains people’s trust, gets them into contract, then proceeds to take advantage of them.

Secondarily, any “truth” offered by the dark side will be incomplete, dated and/or inaccurate. So even if a dark agenda psychic reads you:  The information he will have, if not incorrect, will be second hand. It will not come directly from God, but will be obtained from some other source, and as such will be incomplete, dated and/or inaccurate.  Sometimes the dark agenda also lies to people to gain their consent. So if a dark agenda psychic tell you there is disaster ahead:  This may actually be an attempt to gain your consent for a disaster to happen.

Thirdly, anything that comes from the dark side comes with a spiritual contract, binding you to the dark agenda.  Even accepting a reading from a dark agenda psychic can put you in contract with the dark side.    (Information on protecting your Spiritual Contracts here.)

There is nothing good about Zetas, they are not real souls, they are manufactured souls. White Zetas are Satan’s Warriors — Satan’s First Line of Defense. I have heard another dark agenda agent have talked about these Zetas, who are desperately seeking to ensnare the planet in slavery once again. 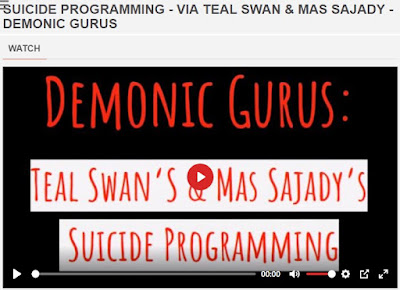 From what I can see, Teal Swan belongs to a rogue league of Pleiadians who joined with White Zetas. She is not an “arcturian” as she fancies. She is not working with God, she is in alliance with the dark agenda and its agents. She was being groomed for a larger role — but that has been thwarted by the fact that she’s being exposed. Thank you those who have been systembusting her!  By the way, you are not Teal Swan’s victims — you are her systembusters and are doing a great job. 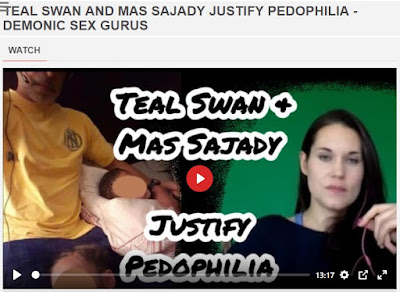 THE MAKING OF A DEMONIC GURU

For example, I believe that Mas Sajady was severely abused at age 4. After that, I was shown that Beelzebub came and comforted him.  Accepting Beelzebub’s “comfort” at age 4 got him into contract for the rest of his life with the dark agenda.  The dark agenda can be very devious and plotting. Something similar likely happened with Teal Swan — at a young age, at the height of vulnerability, the dark agenda managed to get control of her soul

The same process of getting ahold of the souls of children is used to create despots, dictators, and other influential dark players around the world.  Do know that the dark agenda preys upon everyone:  It is seeking to get control of you and your loved ones as well.  And prior to age 6, the spirit is most vulnerable to being possessed and controlled.

In conclusion, Teal Swan is in league with the dark agenda. She advocates for their platform: Death, abuse, tyranny. Her handler Sarbdeep Swan came and posed her in an Illuminati-friendly position. From what I have been shown, she works with demonic aliens, and has been orchestrated since a young age to promote their agenda. The point is we want these demonic agents to be stopped, and at some point in their lifestreams, to be redeemed.