Here are some of most watched videos exposing the Sajady-Zhou cult. All videos are posted across multiple platforms due to desperate censorship by the cult members.

BANNED! MAS SAJADY IS NOT A PEDOPHILE!

When abusing legal process has failed to silence the critics, Sajady and Zhou have resorted to harassing them on social media, continually abusing censorship flagging systems in the attempt to get the information exposing them taken down. Here’s a humorous rap video that Zhou and Sajady got banned off Youtube. Doesn’t Mas Sajady want to be called “not a pedophile”?

Just in case you have any remaining questions as to Mas Sajady’s character, here are excerpts from Mas Sajady’s profanity-laced sermon at the Lake Harriet Spiritual Community, July 26, 2019.

Sajady and Zhou paid lawyer Moshe Horn to defend their new age scam. However, it appears Horn has failed to vet his perverted and anti-Semmitic clients before agreeing to work for them.

HAS MAS SAJADY HAD SEX WITH PROSTITUTES: BODY LANGUAGE ANALYSIS

FEI ZHOU DENIES SHE’S A PROSTITUTE TO THE POLICE

Fei “Fay” Zhou is one of Sajady’s alleged mistresses. Like Sajady is demonic, clairvoyants say that Zhou practices witchcraft, with a penchant for sticking needles in kewpie dolls.

Her is Zhou denying she’s a prostitute to the police — despite the fact that she advertises herself as one.

This video is a photographer’s eyewitness account of Zhou and Sajady when his wife wasn’t around.

In the interview Teal Swan did with Mas Sajady, they both: Justified pedophilia, expressed hatred for lightworkers, and made many more problematic statements. Both Teal Swan and Mas Sajady have also encouraged suicide, they have clients who have taken their lives, and have paid homage to Hitler. They are both running diabolical cults. 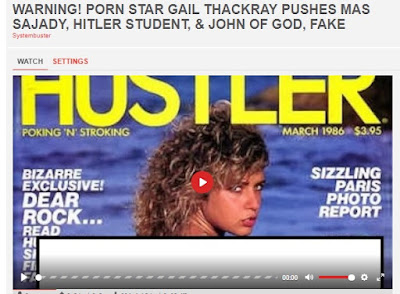 Self-appointed spiritual authority Susan Shumsky has repeatedly turned a blind eye to the perverse nature of sleazy sex guru Mas Sajady and his handler Fei Zhou. Shumsky has been extensively warned, but continues to promote them. Susan Shumsky is spiritually corrupt.

Sex pervert Mas Sajady and Fei Zhou are running an anti-Semitic cult. Sajady has condoned Hitler’s crimes, cited Hitler’s biography as an influential book, expressed admiration for Hitler, and even generates customers who make anti-Semitic comments at his events.

More videos about anti-Semitism in the Sajady-Zhou cult here.

Like Teal Swan, Mas Sajady is a suicide guru, basically running a death cult. This video exposes both of them. More information about Teal Swan & Mas Sajady’s Suicide Programming here.

ADVOCATING FOR DRUG USE

The Sajady-Zhou cult advocates for drug use. They have made podcasts and posts instructing people how to take drugs. Sajady has also said drugs have helped “great people” to achieve great things; drugs “allow you to grow”; and that his products will help “keep you safe” while doing drugs. This video plays his statements.

More videos about Sajady and Zhou encouraging drug use here.

As Sajady and Zhou’s “public relations” employee, Kaille Padgett has threatened whistleblowers of Mas Sajady’s fraud and called them obscenities. Yet Padgett herself appears to be a willing victim to the con man she so desperately defends. Kaille Padgett has posted many deaths on her Facebook page in the time while working for Sajady or under his influence. These deaths appear to be death sacrifices — deaths called in by Sajady and Zhou to feed their demons.

New age charlatan Flerida “Medium” Todorovski has been not only irresponsible in her choice to continue to promote the Mas Sajady and Fei Zhou cult, she has been diabolical. Todorovski has failed to heed the facts and been aggressive in attacking whistleblowers. The below video shows Todorovski responding with profanity when confronted about helping recruit children for Mas Sajady to prey upon. Sajady and Zhou have ties to pedophilia and post apparent pedophile symbols in their marketing. But that hasn’t in any way diminished Flerida Todorovski’s loyalty to the Sajady – Zhou cult.

Alina Janssen has continued to promote the cult of con man Mas Sajady and Fei Zhou, despite being warned. Janssen has also acted as a cult handler, love-bombing people in as they arrive, offering hugs and attempting to down play the protest of Sajady’s events that is occurring. Janssen has even defended Sajady to the police.

Despite her role in helping recruit more victims for the Sajady cult, Janssen plays the victim, denying responsibility for her choice to recruit for the Sajady-Zhou Sex and Death Cult.

More videos about Alina Janssen at these pages:

Sajady and Zhou have conned an extensive assortment of shady associates into promoting their perverted cult. Most notable is Gary Perisian, of the Lake Harriet Spiritual Community. Perisian has insisted on continuing to promote this perverted scammer couple, long after being warned and aware of the nature of their cult. This video covers some of the facts about Gary Perisian and his corrupt dictatorship at the Lake Harriet Spiritual Community. More videos about Gary Perisian here.

Sajady and Zhou are running a demonic death cult. Sajady has admitted he works with demons, and boasts that his black magic kills people. Sajady takes pleasure in death. Sajady also encourages suicide, and tragically, clients of his have taken their lives. This video plays Sajady’s statements boasting that he helps people “cross over faster” — that he kills people.